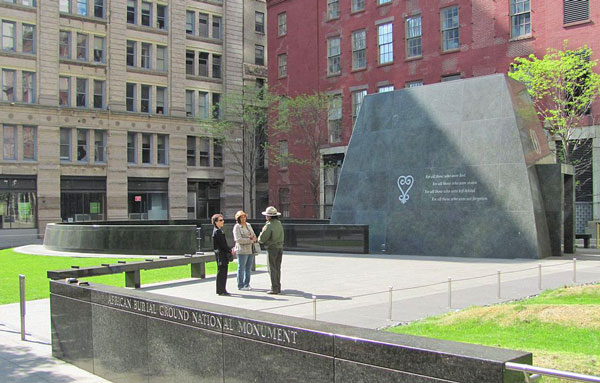 The African Burial Ground National Monument marks the Lower Manhattan location of a burial ground where enslaved and free Africans were buried during a time period from the 1690s to 1794. The burial ground was located outside the boundaries of the early settlement of New Amsterdam, which later became New York.

The long-forgotten burial ground was found in 1991 when an archaeological survey prior to the construction of the Ted Weiss Federal Building discovered intact burials. Community activists worked to ensure that the area was preserved and protected.

A monument stands on the site today. The monument, designed by Rodney Leon, was designated as a national monument in 2006.

A visitor center on the ground floor of the Ted Weiss Building contains exhibits about the burial grounds and about the role Africans played in the building of early New York City.

An article by Edward Rothstein in the February 25, 2010 edition of the New York Times, provides good background about the monument and the discoveries at the site: A Burial Ground and Its Dead Are Given Life.

The African Burial Ground National Monument is in Lower Manhattan, behind the Ted Weiss Federal Building, which is at the intersection of Broadway and Reade Street. The location is a block north of City Hall.

The street address for the Ted Weiss Federal Building is 290 Broadway. The monument is behind the building, at the intersection of Duane Street and Elk Street. The visitor center is in the Ted Weiss Building, on the ground floor.

The memorial closes for the winter (closing November 1 and reopening April 1). The visitor center remains open year around.

Because the visitor center is located in a Federal building, airport-type security screening is in place at the entrance.

Note: The memorial and visitor center and operated by the National Park Service. Hours of operation are established by the Federal Government and subject to change. Please visit the memorial’s website for updates.

Admission to the memorial and visitor center is free.