There are two Upright Citizens Brigade theaters in New York City, one in Chelsea and one in the East Village. Both host free weekly comedy shows. 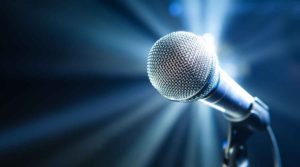 The UCB theaters were founded by a Chicago-based group of comedians (Matt Besser, Amy Poehler, Ian Robers, and Matt Walsh) as training facilities and performance spaces. The UCB theaters focus on improv, but also feature sketch and stand-up comedy.

ASSSSCAT 3000 (Improv) – Sundays at 9:30 p.m.  A long form Improv show that sometimes features well-known special guests. Free tickets are distributed at 8:15 p.m. outside the theater on the night of the show. Info.

WHIPLASH (Stand-Up) – Mondays at 11:00 p.m.. An eclectic mix of stand-up comedians perform at this free weekly show. The line-ups aren’t announced in advance and the shows may include anyone from up-and-coming comics to big name guests. This is a free show that accepts online reservations. To reserve tickets, go the the theater’s schedule page, select the show you’re interested in, and look for the “Free – Make Reservation” button. Reservations open up the Monday before the performance date.

Thursday Night Open Mic at UCB East – Open Mic Night at NYC’s Upright Citizen’s Brigade East Theatre is held on the first and second Thursday of each month. These free shows start at 6:00 p.m.. Would-be participants put their names in a bucket and 14 names are picked at random for a 4 minute spot on stage. Info

Free is always nice, but regularly scheduled comedy shows at the UCB theaters are pretty good deals also, with ticket prices that range from $5 to $12. See a full schedule of UCB Theater performances.

An advantage of the paid shows is that you can reserve your tickets in advance. You’ll pick up and pay for the tickets at the theater. After you pick up your ticket, you can get in line for admission to the theater. Seating is first-come-first-served, so if getting seats in the first few rows is important to you, get to the theater early. If all the seats are gone, you might end up standing.

The UCB Door Guys: A couple interns who work as “door guys” at the UCB Theatre in Chelsea have posted some useful tips on attending Upright Citizen Brigade shows.

Yelp: Reviewers at Yelp provide lots of helpful tips and guidance on what to expect at the UCB shows. Visit the Upright Citizen Brigade Theatre page at Yelp.