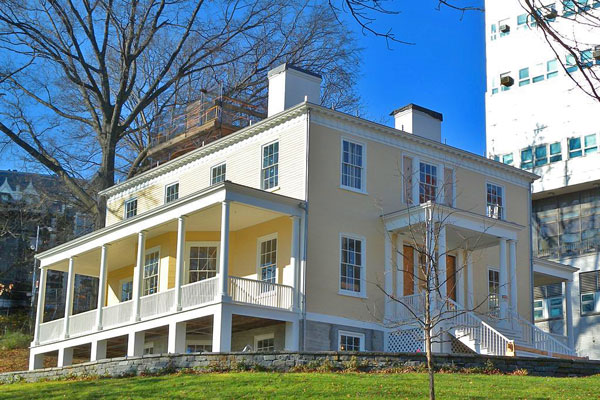 Alexander Hamilton built a Federal Style “country home” on 32 acres of land he owned in Upper Manhattan. The home was completed in 1802, two years before he was killed in a duel with Aaron Burr. He named his country home “The Grange” after his grandfather’s estate in Scotland. His family retained ownership of the house for 30 years after his death.

The home has been restored and is now owned and operated by the National Park Service. It is now officially known as Hamilton Grange National Memorial.

Visitors can take a guided or self-guided tour of the restored home, view an introductory film, and learn about Alexander Hamilton through informational exhibits.

Hamilton Grange is open to the public Wednesday through Sunday (except Thanksgiving and Christmas) from 9:00 a.m. to 5:00 p.m.

See reviews and comments from Hamilton Grange visitors at TripAdvisor.

Note: Information provided is accurate to the best of our knowledge at the time of publication. Please visit the official Hamilton Grange website to confirm information and hours of operation.

Although the house survives today, it is not in its original location. It has been moved twice, although it has stayed in the same neighborhood.

The first move came in 1889, when a church acquired the structure, moved it several blocks from its initial location, and used it for services. The second move came much later when, in 2008, the house was moved by the National Park Service 500 feet to its current location in St. Nicholas Park. The move shifted the house from a street where it was crowded by other buildings to a setting more in keeping with the open lands on which Hamilton’s home was originally constructed.

Following the relocation to St. Nicholas Park, the home was closed while it underwent extensive renovations. Hamilton Grange reopened to the public in 2011.

The New York Times ran a good article about the 2011 reopening: A Founder’s at Home.