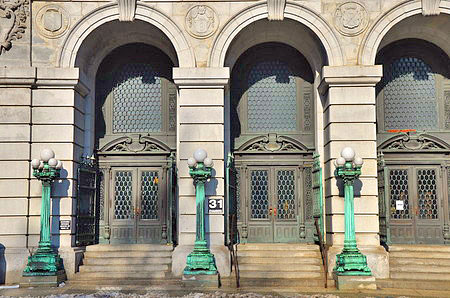 If you have family history in New York City, the Municipal Archives are located in the same building and a great source of genealogical reference materials.

The Department of Public Records & Information Services publishes a blog featuring items within the archives and maintains an online gallery of thousands of historic images from it’s collections.

New York Today: Treasures of Chambers Street – a New York Times article, with video, about the Department of Records archives and exhibits.

The Surrogate’s Court building was designed at the height of the City Beautiful movement, which focused on monumental grandeur. Built in the Beaux Arts style, the structure has an ornate granite exterior and an elaborate marble lobby with a grand staircase and a series of arched balconies under a vaulted ceiling with mosaic inlays and domed skylights. The lobby is a popular site for special events and has been used as a filming location for several movies and television shows.

Take a look at Surrogate’s Court/Hall of Records video below. It’s part of the New New Landmarks Conservancy’s Tourist in Your Own Town series.

Tourist In Your Own Town #29 – Surrogate’s Court / Hall of Records from New York Landmarks Conservancy on Vimeo.

The address for the Surrogate’s Court Building and Department of Records Visitor Center is 31 Chambers Street. The building is located at the corner of Chambers and Centre Streets.

There’s no exterior sign for the visitor’s center, but the building, with it’s columns, statuary, and mansard roof, is hard to miss. Tweed Courthouse and City Hall are nearby.