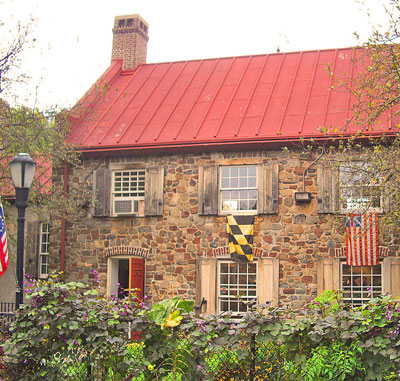 Brooklyn’s Old Stone House sits on the site of largest battle of the Revolutionary War, where 1,300 Americans were killed or captured.

The Old Stone House is a reconstruction of the original home which was destroyed in the 1890s.

Today, the house serves the dual purposes of marking the history of site and serving the neighborhood’s current population. The house contains exhibits about the Battle of Brooklyn (including a diorama model of the battle) and education programs are offered for school children. The house and grounds also serve as a center for various community activities, including art exhibits and music and theater performances. Visit their website for information on upcoming events.

Read a January 2015 New York Times article about the Old Stone House and the Battle of Brooklyn: Where George Washington Lost a Battle in Brooklyn, a Museum Dedicated to Its History Sits.

The house is located at Washington Park in the Park Slope neighborhood of Brooklyn. It’s located on Third Street, between Fourth and Fifth Avenues. The J.J. Byrne Playground is also located in the park and provides a good place for youngsters to get some outdoor exercise.