See the Daily News Building and the “Daily Planet” Globe 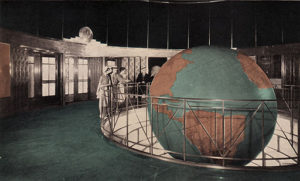 The Art Deco entrance and lobby of the Daily News Building will look family to fans of the 1978 Christopher Reeve Superman movie. The building stood in as the film’s fictional “Daily Planet” building.

The building’s exterior features a large mural carved into the facade and an Art Deco awning over the entrance, but the Daily News lobby is the main attraction.

Just inside the building is a huge revolving globe. The globe is 12 feet in diameter, sits in a depression that’s lit from below, and is surrounded by a compass rose designed inlaid into the lobby’s marble floor. The globe sits under a domed rotunda ceiling covered in black glass and topped with an Art Deco depiction of the sun. On the lobby walls, you’ll also find a display of brass meteorological instruments, recording measurements such as daily rainfall and atmospheric pressure, and an ornate clock showing the time in 17 time zones.

The News building opened in 1930 and served as the home to the Daily News until 1995. The building now houses a number of tenants, including the Daily News’ TV station WPIX.

The News Building location is 220 East 42nd Street in Manhattan. It’s about midway along 42nd Street between the Chrysler Building and the United Nations Headquarters.

The exterior of the building can be viewed from the street, and visitors can enter the building to see the lobby and globe during normal business hours.

See comments and photos from visitors to the Daily News Building at TripAdvisor.

References and Links to Additional Information

Scouting NY – You’ll find great descriptive detail and many nice photos of the Daily News Building Interior in this article from a site written by a movie location scout.

Atlas Obscura – An informative article about the Daily News Building, with photos, from the website that “explores the world’s hidden wonders”.