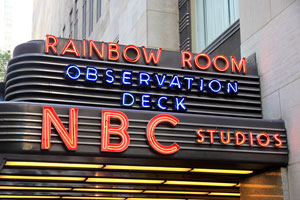 You can attend a taping of Late Night with Seth Meyers for free, and you don’t have to actually stay up late to be in the audience. The show tapes in the early evening, around 6:30 p.m.

Blocks of tickets to tapings are opened up for online reservations a couple weeks in advance of the shows. To see what’s currently available, visit the Late Night with Seth Meyers ticketing website at 1iota.

You’ll need to sign up with 1iota in order to apply for tickets. You can do that in advance at this link.

If you get tickets, you’ll still need to check-in at the 30 Rockefeller Center studio prior to the show. More tickets are issued than there are seats available, and entrance tickets are issued on a first-come-first-served basis. It is possible you won’t get in, but the 1iota site says that it’s very rare that they can’t take everyone in. If you don’t get in, they’ll let you know how to attend a future taping.

Most tapings of Late Night with Seth Meyers begin at 6:30 p.m., with an audience check-in time from 4:45 to 5:30 p.m. Tapings usually end around 7:45. The entire audience process, from check-in through the taping of the show, takes about three hours.

Note: The show has an age requirement. You must be 16 years of age or older at the time of show to attend. You’ll need to show a photo ID as proof of age.

Have questions? Check out the Late Show with Seth Meyers tickets page.

A fun alternative to sitting in on an entire taping of Late Night with Seth Meyers is to be in the audience where Seth tests out the jokes for his opening monologue. Free tickets for the monologue rehearsals are distributed at 11:30 a.m. on the day of the show in The Shop at NBC Studios at 30 Rockefeller Plaza. Enter at the 6th Avenue entrance.

If you didn’t manage to get advance tickets for the show, you can try your luck in the standby line.

Standby tickets are distributed beginning at 9:00 a.m. on taping days to those in the standby line, which forms under the NBC marquee on 49th Street. The line usually starts to form well before 9:00 a.m.

If there are any standby tickets leftover after the 9:00 a.m. distribution, they’ll be available at The Shop at NBC Studios.

Late Night with Seth Meyers is taped at the NBC Studios at Rockefeller Center, 30 Rockefeller Plaza.