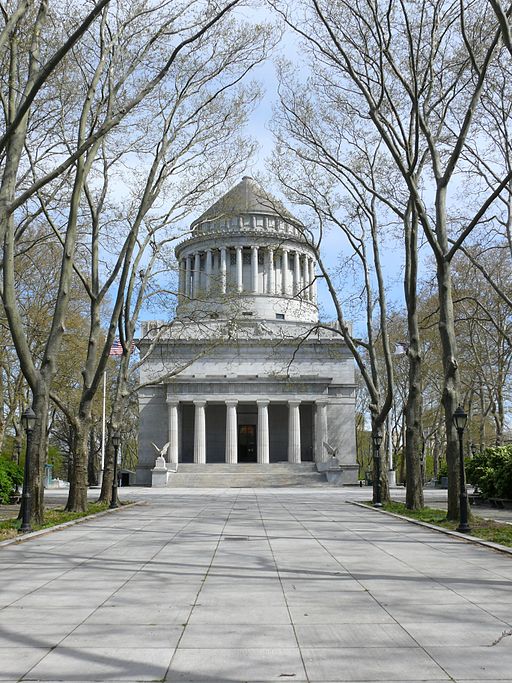 Grant’s family chose New York City as his final resting place, in part, because that was where Mrs. Grant intended to reside, and she wanted her husband’s monument nearby. When she passed away in 1902, she was laid to rest in Grant’s Tomb, by her husband’s side

After several years of fighting between Washington DC and New York City over which city the monument to Grant should be located in and several more years designing, funding, and constructing the monument, Grant’s Tomb was completed in 1897, twelve years after General Grant’s death. Read more about the history of Grant’s Tomb at Wikipedia.

Grant’s Tomb is the largest mausoleum in North America. The monument is constructed of granite and has a domed rotunda which overlooks a crypt with matching red granite sarcophagi where President and Mrs. Grant are entombed.

A visitors center is located near the tomb. The visitor center has exhibits and a short film about General Grant, a bookstore, and public restrooms.

The official name of the monument is the General Grant National Memorial. The monument has been managed by the National Park Service since 1958.

Grant’s Tomb is located in Riverside Park in the Morningside Heights neighborhood of upper Manhattan. The entrance to the memorial is near the intersection of West 122nd Street and Riverside Drive. See a map.

There is no admission fee charged to visit Grant’s Tomb or the visitor center.

See comments from visitors to the General Grant National Memorial at TripAdvisor.

You may have heard the question, “Who’s buried in Grant’s Tomb?” The answer would be Grant, right? Well, not exactly. The tricky part is the use of the word “buried” in the question. The correct answer is “no one,” since Grant and his wife are entombed in sarcophagi above ground in an atrium rather than being buried in the ground.

The question originated with Groucho Marx’s 1950s TV show “You Bet Your Life”.