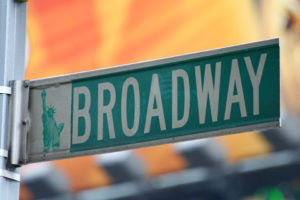 Broadway Week is a great deal for theater-goers. Each year tickets to current Broadway shows are offered at two-for-the-price of one discounts. There is also a $20 upgrade available for seats closer to the stage and/or with a better view.  Most shows participate in the promotion, including some that rarely offer discounts.The most popular shows sell out quickly, though, so it’s a good idea to visit the Broadway Week website and purchase promptly.

2-for-1 tickets are on sale now at the Broadway Week website.

Participating shows include: Aladdin, Anastasia, Beautiful, A Bronx Tale, Chicago, The Children, Farinelli and the King, Hello Dolly!, John Lithgow: Stories by Heart, Kinky Boots, Latin History for Morons, The Lion King, Once on This Island, The Parisian Woman, The Phantom of the Opera, The Play that Goes All Wrong, School of Rock, SpongeBob Square Pants, and Wicked.