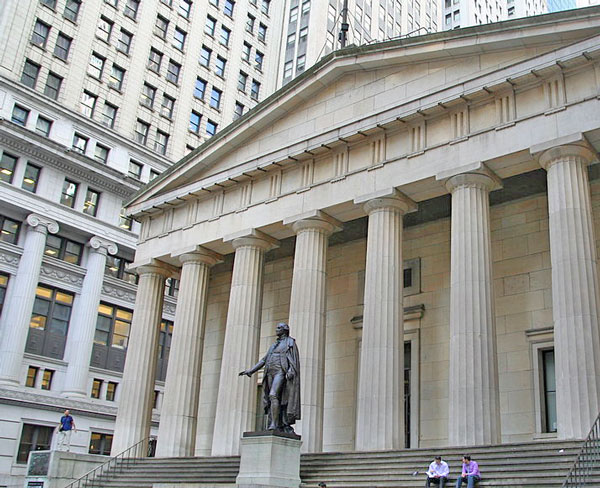 This site is closed on Thanksgiving Day and Christmas Day.

George Washington took the oath of office as the first President of the United States at Federal Hall in New York City. That structure served as the nation’s first capitol building and was where the Bill of Rights was introduced to congress. Unfortunately, that original building was demolished in 1812.

A chunk of the original Federal Hall building – a piece of the balcony on which George Washington stood for his first inauguration – was preserved and is on display in the National Memorial.

A bronze statue of George Washington has stood on the steps of the structure since 1883, marking the approximate location where he stood when first inaugurated as President of the United States.

The monument’s galleries feature exhibits about George Washington and the early days of the United States of America. Items on display include the bible used when George Washington took his oath of office as President.

The monument’s visitor center is located near the Pine Street entrance, on the main floor. You’ll find a park ranger there to answer questions, plus the center is operated in cooperation with NYC’s tourism organization, so there’s lots of information about other New York City attractions.

The Federal Hall National Memorial is located on Wall Street in the Financial District of Lower Manhattan.

The street address is 26 Wall Street.