Things to do in Staten Island 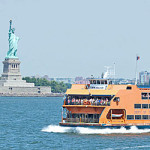 So, you’re thinking about taking the free Staten Island Ferry across the Hudson River to enjoy the views, but what’s there to do once you get over there? Well, a lot of people just turn around and ride back to Manhattan, but there are things to do and see within walking distance of the ferry terminal and as long as you’re there, you should take a look around.

The ferry terminal is located in the Staten Island downtown neighborhood known as St George.  Here are some of the things you’ll find there:

St. George Esplanade – The Esplanade is a waterfront walkway that affords great views of Manhattan across the water. The Esplanade is where you will find Staten Island’s memorial to the 275 Staten Islanders lost on September 11, 2001. The memorial consists of two large white structures designed to represent postcards sent to lost loved ones. The two structures frame the location across the water where the World Trade Center Towers once stood. Names of victims engraved on granite plaques.

Staten Island Museum –  A good option if you’re traveling with children. Permanent exhibits include the Hall of Natural Science, artifacts from the first Staten Island Native-American settlers, Wall of Insects, and the history of the Staten Island Ferry.  The museum also features a selection of changing exhibits.  Admission is just $5 for adults and children 12 and under get in free.   The museum is located at 75 Stuyvesant Place.

Borough Hall murals – The lobby of the Borough Hall (100 year-old building housing the Staten Island Borough’s government) has a set of murals created by the Works Progress Adiministration during the Depression Era.  They depict important moments in Staten Island history and are well worth seeing.  The Borough Hall is located at 10 Richmond Terrace and is open Monday – Friday 9:00am – 5:00pm.

The St George Theatre – This theater was originally a vaudeville and movie palace and now hosts concerts, plays, and other events.  The theater is located at 35 Hyatt Street.

See Where Everything is Located – The folks at visitstatenisland.com put together a nice map that shows where everything is located in relation to the ferry. Map of St. George, downtown Staten Island.

Fun things to do in NYC at discount prices (some are even free!)